Gerhard Hoehme. Relations. Works from 1964 to 1986 and Hoehme in the context of the Düsseldorfer Kunstakademie: Sigmar Polke and Chris Reinecke

With his pictorial and sculptural works, Gerhard Hoehme made a significant contribution to international art in the second half of the 20th century. He was an extraordinary person and artist – his complex oeuvre possesses a unique, effective radicalism and fascinating materiality. Early on, he rose above the Informel, used color as a material substance, and left traditional panel painting behind in the mid-‘60s by expanding the two-dimensional surface into three dimensions and had cords and tubes take hold of the space.

From 1961 to 1984, the artist, who had moved from the GDR to the West in 1951, worked as a professor at the Düsseldorfer Kunstakademie. Hoehme, whose interest in sociological and art-political topics also manifested itself in numerous texts, imparted numerous ideas – just as he himself took inspiration in his own work. Two of the most important students of his first academy class are also presented in this book: Chris Reinecke (born 1936) and Sigmar Polke (1941–2010). Contemporary documents – documentary photos by Erika Kiffl, taken in 1978 in Gerhard Hoehme's studio in Neuss-Selikum, as well as letters – supplement the comprehensive insight into the life and work of this important artist and university teacher. 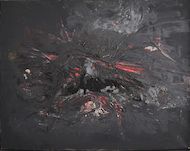 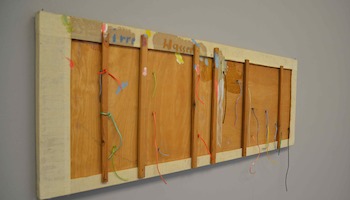 In his open and multi-layered oeuvre, Hoehme questioned and pushed the boundaries of painting and pictorial space again and again. From the beginning, the artist sought the dialogue with the beho...