Fabrizio Plessi is one of the most important and influential artists of our time and has written art history as a pioneer of video art.

In the late 1960s, he recognized the potential of ever-evolving image technology and used it artistically. Numerous installations emerged, where he brought together traditional sculptural materials, such as iron, wood, or stone, with moving images on monitors and, like an alchemist, composed these different elements together to create something completely new. In his motifs, he often relies on the existential elements of our world: air, water, and fire.

The book accompanying the exhibition »Utopia Liquida« shows historical works from the 1970s that document his artistic beginnings, introduced by a text by David Galloway, a great admirer of the artist. Major exhibitions took place at the Guggenheim Museum (New York), the Martin-Gropius-Bau (Berlin), as well as at documenta (Kassel), or at the Venice Biennale. A museum was created especially for his works at Brenner on the Italian-Austrian border. From 1990 to 2000 he taught at the Kunsthochschule für Medien in Cologne, where he set up the chair for the Humanization of Technologization. 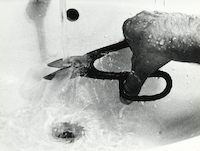 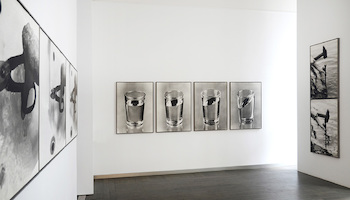 In numerous interventions, that at the time were cutting edge happenings and conceptual art, his fascination for the ancient element became a source of inspiration. It originated from the omnipre... 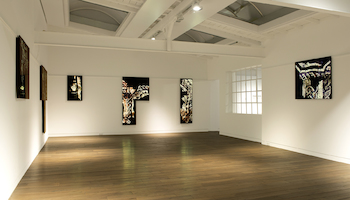 The video installation »Under Water« is impressive with its minimalistic production. Large screens display glowing fragments of a splendid gold and black Byzantine floor mosaic that move inwavel...