Hartmut Neumann constructs with his works a highly innate world: His works lead the observer away  into a micro- and macrocosm which at first glance appears safe and harmonious but at closer inspection  reveals sinister abysses. In his picture language elements of reality, the unconscious, mythology and coincidence collide to enter into a disconcerting symbiosis. With glowing colours and bleak backgrounds Hartmut Neumann opens up a vision of the infinite.

He thereby presents an abstract, sculptural, utopian and staged view on nature. The almost inexhaustible abundance of forms is borne by the idea of the chamber of art and curiosities where "artificialia" and "naturalia" were closely interlocked, like in a microcosm of the universe. Neumann's mysterious process of creation is characterised by opulence and an exuberant wealth of detail. It is a hermetic place, far away from any place that can be experienced in reality. Though this artificial nature seems to be beyond any comparison. He invents a new law for nature derived from painting. The development of artificiality as nature and of nature as artefact accounts for Hartmut Neumann's singular position within the contemporary art world. 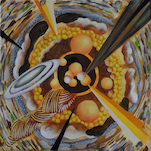